This is the story of Jerry Coe, a Sunny View resident, who served on the front line as a forward observer. 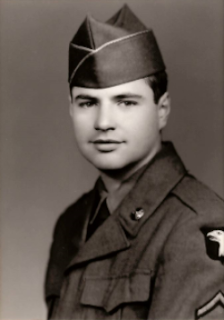 I was working at Sutherland Paper Company as a commercial artist and also building our first house when I got my “greeting” for induction on March 2, 1951. I was to report on March 29th. I wrote a letter asking for a deferment so I could get the house closed. They granted me a postponement until May 10, 1951. My uncle and brother-in-law served in World War II, and they both saw action.
My first camp was at Fort Custer, which was 20 miles from home, so my family was able to visit on the weekends. After basic training, I was sent to Camp Breckinridge in Morganfield, Kentucky. I used to hitch rides home whenever I could – all the way from Kentucky to Michigan! By the time I got home, I didn’t have much time left, but we stayed in our new home that I had built, even though it wasn’t done.
I was on the front line as a forward observer with a scope calling fire and spotting the enemy. We lived in bunkers in the hill. We all wrote letters back and forth. In the beginning, I never got any letters, even though my mother and wife were writing to me every day! It finally dawned on me to ask if there was any mail under my given name of Merrill instead of my nickname of Jerry. They said, “Are you kidding? We’ve got a whole box here for Merrill!” They had only known me as “Jerry.”

LifeBio is an engagement program that captures cherished memories and lasting legacies through storytelling. Since launching in 2000, LifeBio has helped 20,000 people tell their life stories through autobiographical tools and services for all levels of care. LifeBio uses technologies as mediums to help individual document their stories in an easy and unique way such as tablets, web cams, and audio and video equipment. LifeBio has been a partner with Front Porch since 2009. For more details, check out LifeBio’s Impact Story on the Front Porch Center for Innovation and Wellbeing (FPCIW) website.