This is the story of Richard Pool, a Fredericka Manor resident who served in the Air Force during the Vietnam War all while completing his study to become a nurse. 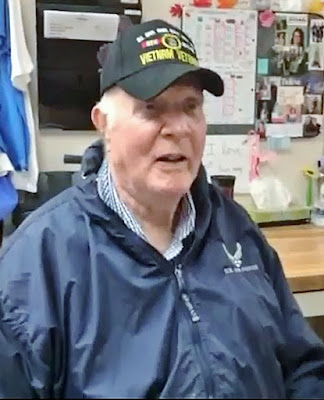 My name is Richard Pool. I was born on July 10, 1942, in Watson, Illinois. I served in the Vietnam War in the Air Force taking care of wounded GIs in the Air Force and I was based in Vietnam. I want to be remembered as someone who is a freedom fighter and loved freedom.

Before serving, I went to Southern Illinois University studying nursing. My aunt was a licensed nurse and worked at a hospital where I studied, and she really talked up nursing to me. She told me I should go to nursing school, so that’s why I went. I became a nurse anesthetist and studied the anesthesia part of my nursing school in the Air Force at Lackland Air Force Base at San Antonio, Texas.

It’s kind of a long story how I joined the Air Force, but we were being drafted by the Army. My friend and I said, “Let’s join the Air Force. We won’t go to Vietnam.” Vietnam was the first assignment I had.

When I left home, it was very scary, because I didn’t know where Vietnam was, much less who the people were or what I was going to be doing. I was pretty scared. I traveled by airplane. I flew to some place in northern California and we flew out of there to Vietnam, which was a 17-hour flight.

In Vietnam, there were plenty of surprises. The atmosphere there meant we had to be alert and ready to run to the nearest bomb shelter.

While I was away, my family was very much affected. I wrote to them and they sent me letters and cookies all the time. The letters from my family were mostly had news about what was going on back home and the football team.

When my service ended, I was overwhelmed. I was so thrilled to be out of Vietnam. I didn’t do anything special when I got home. I wanted to eat some beans and corn bread.

My wartime experiences affected my life. I learned to be very thankful for what I have, fight for what you believe in, and always be true to yourself.

LifeBio is an engagement program that captures cherished memories and lasting legacies through storytelling. Since launching in 2000, LifeBio has helped 20,000 people tell their life stories through autobiographical tools and services for all levels of care. LifeBio uses technologies as mediums to help individual document their stories in an easy and unique way such as tablets, web cams, and audio and video equipment. LifeBio has been a partner with Front Porch since 2009. For more details, check out LifeBio’s Impact Story on the Front Porch Center for Innovation and Wellbeing (FPCIW) website.